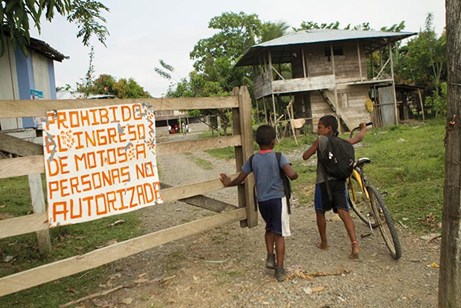 Yomaira Mendoza receives up to five death threats a day. They come in the form of anonymous text messages. On the morning after our first meeting, she told us of the latest one.

“I received a message saying they knew what I was doing, they knew I had talked to you, that we had walked around the farm; and did I think you would all be able to save me from my death?” she says.

I was visiting Colombia with a group of journalists at the request of Christian Aid, in order to meet people who are trying to return to the land from which they were removed during the long-running civil conflict.

Mrs Mendoza is a leader of Caño Manso (“Calm Creek”), a settlement in the Curvaradó river basin in the Colombian department of Chocó. It is one of a number of “humanitarian zones” set up in the region by groups of displaced people who are reclaiming their land, on non-violent principles, and in accordance with international humanitarian law.

Mrs Mendoza believes that the author of the death threats is someone representing the business-owners who have taken over her land. Her family was among the 3000 people exiled from their land during “Operation Genesis” (also known as “Black December”) – mass displacements undertaken in the region by paramilitary groups set loose by the Colombian government to combat insurgents during the conflict.

Peace Brigades International, an organisation that protects human-rights defenders, estimates that between 1996 and 1997, in Curvaradó and Jiguamiandó, about 3000 Afro-descent and mixed-race people were forcibly displaced – about 70 per cent of the population. Last year, the Inter-American Court of Human Rights (IACHR) held the Colombian state responsible for not preventing the displacement.

DESPITE the brutality of the displacement – it was foreshadowed by rumours that a notorious paramilitary unit known as mochacabezas (“beheaders”) were coming, and bodies were seen floating down the river – leaders such as Mrs Mendoza have fought to return to their land. Obstructing them are powerful business interests (called “bad-faith occupiers”) who, in the wake of the displacement, seized the vacant land, transforming it into plantations of palm oil and other crops.

Mrs Mendoza’s attempts to recover her land have been met by savage resistance. On 7 January 2007, her husband, José Eustoquio Cifuentes Rojas, was killed in front of her: “Someone called out to him at night, and they shot him, and he fell at my feet.”

She is convinced that the killing was ordered by the occupant of her parents’ land, who had threatened them repeatedly, but nobody has yet been brought to justice. The death threats started in January, after she made a statement to the Office of the Attorney General, which is investigating the murder.

“For [my husband], nothing can happen. He has already died. But I would like to know why, and who was behind it. And also that whoever did it pays for it.”

Land restitution in Colombia is a dangerous business. In August, the Office of the Attorney General reported that it was investigating the murder of 56 leaders, claimants, or participants in the process. Many of those I spoke to had seen people shot.

Nevertheless, the law is on the side of the displaced. In 2000, the state awarded more than 100,000 hectares of land to the Afro-Colombian communities in Curvaradó and Jiguamiandó as “collective land-titles”. But during the next decade, the land grab by bad-faith occupants continued apace.

COLOMBIA LAND, an organisation that monitors the implementation of restitution, points to “the collusion of the palm-oil companies; corrupt government officials; the military; paramilitaries; and individuals falsely representing the communities”. “Cleansing” the land of bad-faith occupiers is part of the plan for land restitution published by the Constitutional Court in 2010, but it is a slow process, hampered, some say, by a lack of political will. Frustrated by the pace of justice, communities have taken matters into their own hands. Caño Manso is one of eight humanitarian zones established in the region. I visited three. Families live in close proximity, in wooden structures. There is no running water, and a generator provides electricity for a short while in the evenings.

But they were not joyless places: children ran around, football matches were taking place. And there was a strong sense of solidarity within and among the zones. These are determined people.

“I made the decision: I will either starve to death here or go back to my land, even if they kill me there,” says Enrique Petro, a 76-year-old man who donated five hectares of his private property to establish the first humanitarian zone in Curvaradó. He has received death threats after testifying in both Colombia and the United States.

“She was born into the resistance,” Leidis Tuiran Gonzalez says of Daniella, her seven-year-old daughter, in Caño Manso. “She was born in the womb fighting, and she came out kicking.”

I was shown, with some pride, the remains of a house that once belonged to Luis Felipe Molano Diaz, a bad-faith occupier who had been subject to a state eviction order. It had been demolished by the community, with their bare hands.

But the defiance was shadowed by grief. Mr Petro has lost two children in the conflict, and has seen his land “all chopped up. They destroyed it all.” His wife is too afraid to return: “Everything we have lost – our children, and everything else – weighs too heavily on her heart.”

THE humanitarian zones incorporate memorials to those who have fallen. In Caño Manso, a small hut, painted blue and white, serves as a “house of memories”. It is inscribed with names and dates marking murders. Hanging from the roof is a picture of Walberto Hoyas, a 40-year-old father of two, who was assassinated in 2008 by paramilitaries who invaded the zone.

Mrs Gonzalez witnessed the killing: “He was an important leader, who knew a lot about what was happening in the region; so they killed him to shut him up.”

Memories were still raw in Costa Azul, a new zone set up in 2013. A banner at the entrance reads: “In memory of Manuel and Samir Ruiz.” In March 2012, Manuel, a community leader, and his 15-year-old son, Samir, travelled to the town of Mutata, lured by a bogus text-message telling them to collect a prize.

Significantly, the message arrived the day before Mr Ruiz was due to accompany a state mission to help identify bad-faith occupiers in the region. During their return, by minibus, they were abducted. Their bodies were found four days later, in the river. They had been shot.

The ombudsman’s office reported to the Constitutional Court that the killings were committed by paramilitaries, and were “directly linked” to the part Mr Ruiz played in the land-restitution process.

The day of their disappearance was “the blackest day we have ever lived”, James Ruiz, one of the surviving sons, says. He describes the mocking phone-calls from the kidnappers, the collusion between the police and the paramilitaries, and the token attempts by the police to find the bodies.

Trinidad Ruiz, Manuel’s wife, weeps, remembering the events: “I felt like my world was ending. . . And I still have to carry it every day.”

Today, the Ruizes’ family land remains occupied, despite promises by the government to return it to them. “Each of the children should receive their piece of land,” Sandro Ruiz, the eldest son, says. “A little piece of farmland for each of the children – that is why my father was involved in the struggle.”

MY MANY conversations revealed a familiar pattern: displacement by paramilitaries between 1996 and 1997; a land-grab by business groups; and, more recently, attempts to reclaim the land thwarted by businessmen, in league with paramilitary groups.

The paramilitaries are the legacy of a 1968 law that allows the military to arm civilians “when it was deemed appropriate, as in the defence of private property”. This had been a response to the formation of the Revolutionary Armed Forces of Colombia (FARC) in 1964, a guerrilla group set up to overthrow the government and establish a Marxist regime.

But these deadly armed groups used the threat of insurgency as camouflage. Politicians, trade unionists, human-rights leaders, and community leaders have all been targeted in the past 25 years.

More than 200,000 people are estimated to have died in the conflict, and 5.7 million have been internally displaced, and the National Victims Unit has identified six million victims – 12 per cent of the population – are eligible for reparation.

The Colombian government and the FARC began peace talks in October 2012. The challenge, articulated throughout our trip by Christian Aid’s partner, the Inter-Church Justice and Peace Commission (CIJP), is securing both peace and justice.

In 2005, a law was passed that offered much-reduced sentences to demobilised paramilitaries who confessed their crimes. But Dr Alirio Uribe, a human-rights lawyer, says that only 15 convictions have been secured. Paramilitaries continue to terrorise their targets.

“This has been a peace process between friends,” he says. “It was carried out by politicians who had strong connections to the paramilitary structure. . . They were continuing to carry out new displacements, new sexual violence.”

He wants to see a “transitional justice” programme in place that would involve not only the guerrillas and paramilitary groups, but the state.

IN THE humanitarian zones, however, there is little faith that the state will help them. “The government does not want to give us back our territory,” Miguel Hoyas, a brother of the murdered Walberto, says. “We ask ourselves: where is the democracy for us the poor people? Democracy does not exist.”

In the absence of a strong state, it falls to organisations such as the CIJP to agitate for victims’ rights. Led by a Roman Catholic priest, Fr Alberto Franco, the commission has, for more than 20 years, spoken out against human-rights violations, and fought to secure justice for victims through the courts.

It is dangerous work. Members have been subject to death threats, kidnapping, and attempted murder. The headquarters in Bogota lies behind steel bars capped by barbed wire.

The commission has doggedly pursued the perpetrators of atrocities. In 2012, it helped to secure the conviction of General Rito Alejo del Rio, sentenced to 25 years in prison for his part in the murder of Marino Lopez, a leader of the Cacarica community who was decapitated by paramilitaries. The judge found that the general had “met with, and protected, the AUC [paramilitary group] in the region”.

“Today, Colombia has begun recognising victims,” Marco Velasquez, a community leader from Cacarica, says, “but it’s not due to the work of the government, but to the struggle, the fight, of many human-rights organisations, and campesino organisations.”

Progress is frustratingly slow. The organisation Human Rights Watch reports that, as of July, just one family had returned to live on their land as a result of rulings secured by the government’s restitution unit.

The deputy director of the national victims unit, Iris Marin, is aware of the scale of the challenge facing her, given the threat that reparation poses to “territorial economic powers in the region”. She urges caution: “We are not asking people to be quiet, but they need to do so with adequate protection.”

She denies that there is a lack of political will to secure justice and protection for victims. The government has allocated more than £16 billion to the implementation, over a ten-year-period, of its Victims and Land Restitution Law.

Two months after our visit, news comes from Christian Aid that Mrs Mendoza has been provided with a car and a bodyguard by the National Protection Unit. She is still being threatened.

There is also news that Luis Felipe Molano, and two other bad-faith occupiers, have been evicted – after four years of campaigning by Christian Aid and its partners. It is a small but significant victory for communities that are fighting for justice, as well as peace.

Christian Aid Week 2014: Give people a future without fear, runs from 11 to 17 May. For more details, resources, etc., visit www.caweek.org.