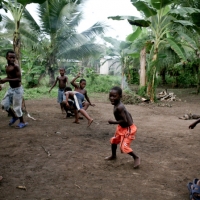 Decision by the Inter-American Court on Human Rights of the Organization of American States (OAS) on the Operation Genesis case. This ruling finds Colombia responsible for not preventing the 1997 displacement of thousands of Afro-Colombians and the brutal murder of civilian Marino Lopez Mena.

The Court states that Colombia did not meet its obligation to guarantee humanitarian assistance and a safe return to the Afro-Colombians who were displaced due to these abuses. As a result, the Court orders Colombia to take a series of steps to remedy these injustices. These include a public recognition of its responsibility, guaranteeing that the territories of the Community Council of the Cacarica River Basin Communities are fully restituted to their rightful owners and reparations for the victims.

Human rights groups report that members of the 17th Brigade collaborated with paramilitary groups to carry out this military operation. Retired General del Rio was taken into custody in 2009. In August 2012, he was sentenced to 25 years in prison for the crime involving Marino Lopez. Verdad Abierta reports that Freddy Rendon (“The German”), chief of the regional paramilitary bloc, declared in 2010—within the framework of the Justice and Peace process—that collusion took place between the 17th Brigade and paramilitary commanders. Operation Genesis formed part of a larger paramilitary political effort to displace Afro-Colombians from their territories to facilitate the entry and expansion of oil palm plantations throughout the department of Choco. Mr. Rendon will likely be sentenced within the next year for his admitted role in 1,041 crimes.

While these developments are big steps forward in obtaining justice for these Afro-Colombian communities, WOLA remains concerned about the security of members of the Cacarica communities, and of individuals involved in the related case of the communities of Curvaradó and Jiguamiandó, as well as the safety of members the Inter-Ecclesial Commission for Justice and Peace (ICJP), the organization that accompanies both cases. On January 5, new death threats were received against Afro-Colombian leader Marco Velazquez. Raul Palacios, an Afro-Colombian from Curvaradó, was subject to threats on December 30, 2013. This comes just days after other human rights defenders received threats against their lives. ICJP staff, too, have suffered numerous security incidents and received constant death threats in the past year. The high level of risk faced by these leaders and ICJP require more robust attention and actions by Colombia to prevent harm from taking place. Reports on the ground allege that local police continue to fail to take action against paramilitaries business owners responsible for the illegal usurpation of land. The situation also requires that Colombia work to dismantle the paramilitary structures that continue to operate in the Chocó region.

To read WOLA’s testimony in the case (Spanish only), please click here.