As the evening sun set, approximately sixty hooded men stormed the home of Mrs. Marleny Benitez, firing guns, while restraining and beating her son and a neighbour, significantly injuring them all.

The armed men, wielding chainsaws, destroyed some homes and buildings belonging to the returning and claimant families.

Following these initial attacks, they proceeded to burn the house, which they had violently evicted. The family was driven by force to another location.
Once inside the Santa Maria police station, some of the hooded men removed their hoods in plain sight. The police then refused to intervene on behalf of the family.
Marleny, her son and neighbours are currently recovering from their injuries in Belén de Bajirá.

Individuals, well known to have ties to these occupying businesses acting in bad faith, like Guillermo González, Luis Felipe Milano, Enrique Molano y Javier Restrepo Girona, among others, have been identified as overseeing the attack.

This serious attack occurs 13 days following the judicial decision in the land restitution civil circuit court to deny an injunction filed by the council of community families, citing that there was no evidence of violence in the territory, despite the Ombudsman’s insistence.

Just 18 months ago, this particular family was intimidated and threatened by an occupying force of 100 men, acting in bad faith, who claimed to have received these lands from Sor Teresa Gómez and a priest in the diocese of Apartadó.

The absence of any guarantees to the land claimants is evident. Moreover, this violent act further reflects the failure of the executive and judicial branches to acknowledge the real illegal factors at work in agribusiness’ pursuit to define the best uses of the land. 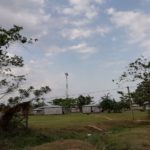